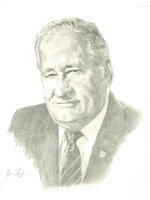 Eugene Whelan, Officer of the Order of Canada, member of the Senate of Canada, former Minister of Agriculture for Canada, Ambassador to the United Nations Food & Agriculture Organization, hails from Essex County where he served on Township and County Councils and the local school board before moving to the national political arena.

He had an unwavering belief in organized marketing. During Mr. Whelan’s 10 years as Federal Minister of Agriculture he proclaimed national supply management agencies for eggs, chicken and turkeys, in addition to the Canadian Dairy Commission.

Throughout his political career and beyond he was a tireless crusader and supporter of supply management, a system that limits production to domestic requirements while providing a return to producers based on a cost of production formula. He saw this as a way to provide stability and a reasonable return for farmers while offering consumers a safe, nutritious and affordable food supply.

For those commodities not under supply management he fought hard to provide a level playing field in world markets at a time of heavy American and European subsidies. He was successful in getting the Canadian Government to increase its payments to farmers through ad hoc and/or safety net programs.

While Minister of Agriculture he raised the loan limits of the Farm Credit Corporation to assist young beginning farmers, created a new Crop Development Fund to stimulate crop production diversity and acquired federal provincial assistance for Ontario farmers hurt by severe flooding in the early 1970’s. He introduced the Advance Payment for Crops Act to guarantee loans to producers requiring advance payment for perishable crops. He established legislation to protect fruit and vegetable growers from processor bankruptcies.

While many of these policy initiatives were national in scope they made a huge contribution to the stability and financial viability of Ontario agriculture.

Locally, Mr. Whelan served as Warden of Essex County, was a Director and President of the Board of Harrow Farmers Co-operative where he spearheaded a drive for a new feed mill and grain elevators at Harrow and McGregor. He also served as a Director of United Co-operatives of Ontario, Ontario Wheat Producers Marketing Board, and the Ontario Federation of Agriculture.

Eugene Whelan remains one of Canada’s most outstanding agriculture ministers and spokespersons for the industry.