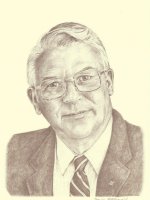 Nominated by: Katherine A. Griffiths

Ralph Ferguson’s agricultural activism started in 1968 when he joined with a group of Ontario farmers who developed a 54 point Agriculture Policy which was ultimately accepted by the Ontario Liberals. By 1970, this policy had been accepted by 87% of the voting delegates at the National Liberal Party Convention and thus, became a cornerstone of Canada’s agriculture policy at that time.

In 1980, he was elected as the Member of Parliament for the Riding of Lambton-Middlesex. During his campaign, he insisted that campaign vehicles use ethanol in their fuel, and this began his ongoing campaign over the years to pave the way for the fuel ethanol industry in Ontario and the rest of Canada. By 2005, the Canadian Renewable Fuels Association, assisted by Ralph Ferguson, convinced the Federal Government to waive the excise tax on fuel alcohol, thereby making it possible to competitively market gasoline/alcohol blends. The Ontario government now requires all gasoline sold in this province to contain 5% ethanol, facilitating another market opportunity for cash crop enterprises and developing a new industry for rural Ontario with excellent potential for growth.

As the Federal Minister of Agriculture, the Honourable Ralph Ferguson was in a good position to assess the ebb and flow of farm gate prices and to make some very interesting observations. As a result, perhaps his most pivotal and memorable contribution to agriculture, to farmers and also to the consuming public, was his well known “Compare the Share” document first published in 1990. The study documented for the previous ten year period the farm gate price, the wholesale price and the retail price for each of the commodity groups. The statistics collected painted a picture of steadily increasing retail food prices while the farmer’s share of that price declined, and at the same time, corporate concentration in the retail food sector and the distribution sector was pronounced. Furthermore, the report showed that from 1981 to 1990, farm input costs increased by 16.5% while farm gate prices increased by only 0.2%. Ferguson’s “Compare the Share” report was seen as a credible resource book which enhanced the ongoing debate about the sustainability and viability of Canadian agriculture. Ralph argued that producers must receive a fair return for their investment, management, and risk, and he also advocated for strong producer marketing boards and agencies.

The Honourable Ralph Ferguson has been admitted to the Ontario Agricultural Hall of Fame in acknowledgement of his contributions to a greater vision for the potential and value of rural Ontario and Canada’s agricultural sector.