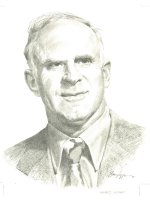 Howard Laidlaw, of Peel Lodge Farm in Peel County, is best known for his impact on rural youth and the Holstein cattle industry. During 70 years of membership and leadership in 4-H clubs, he helped motivate others to participate in life with enthusiasm and concern for improvement of both themselves and their communities. He understood leadership, mentoring, clear thinking and communication and used them to encourage young people to evaluate alternatives, make decisions and excel in whatever they chose to do. His interest and enthusiasm led Howard to become an excellent teacher and judge of Holstein dairy animals and poultry. He led the Brampton Senior Dairy 4-H club for 31 years, including 10 consecutive years in which the club won the Silver Dollar Competition. He also led the Peel County Poultry club for many years instilling in many young people a lifetime interest in showing birds.

Howard was instrumental in the formation of the Junior Farmers’ Association of Ontario, which united local clubs into a single Ontario organization. Howard became first vice president in the Junior Farmers’ inaugural year, and participated in ‘Self Help and Community Betterment’ projects. He attended a World Youth Conference in London England in 1945 that led to an international exchange program between Ontario and the British Isles, a program that continues today. Mr. Laidlaw served at the local, provincial and national level of organizations supporting the Holstein breed in Canada. He was passionate about the breed and made a significant contribution to its improvement. Howard developed several renowned lines of Holsteins and earned a Master Breeder Shield in 1967. He was a regular showman at Peel B&W Days, Erin Championship Show, C.N.E., US shows and the Royal Agricultural Winter Fair where he showed the All Canadian Breeder’s Herd in 1969.

Not only did he help implement the All Canadian Holstein Judging Competition, but he also upheld honesty and integrity in and out of the show ring, raising the bar for the entire industry in Canada and around the world. Mr. Laidlaw was among the first farmers from Peel County to be granted a certificate to practice artificial insemination. Through connections in Holstein Canada and extensive travel, Howard Laidlaw became aware of the need and opportunity to assist less fortunate people in many countries. One result was an organization called S.H.A.R.E. (Sending Help And Resources Everywhere). In its first year it accepted thirty-eight donated Canadian heifers, which were distributed through an agricultural school in northern Brazil. Each recipient agreed to pass on the offspring of the original gift to another family. Howard was the founding president of this charitable organization; its program has now spread to other third world countries. Along with his spouse, Eileen Cunnington Laidlaw, Howard served his church and community for many years. He was president of the Young Peoples in Peel County and a director for the Peel Mutual Fire Insurance Company. The essence of the late Howard Laidlaw is summed up in the words: Integrity, Fairness, Enthusiasm, Service, and Sharing to make everyone he met a better person.