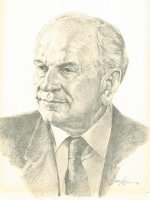 Howard Malcolm, of Victoria County, was not only an outstanding pork producer, but a tireless worker and strong advocate of the pork industry across Canada. As a producer, his family farm consisted of a farrow to finish operation.

Malcolm served 15 years on the Ontario Pork Producers’ Marketing Board and was its Chairman from 1977 to 1981. He provided the driving force in the development of Ontario pork marketing from small units on mixed farms to modern production units employing some of the world’s leading-edge technology. Howard was instrumental in the establishment of the Canadian Pork Council and served on the Council from 1975 – 1987. He was President from 1983-1987.

Howard Malcolm has traveled the world promoting Canadian Pork. A firm believer in free trade, he worked relentlessly in negotiations with the United States regarding countervail duty on Canadian pork and hogs entering the United States. Through his efforts the duty was removed. He served for three years as a member of the SAGIT committee dealing with the North American free trade agreement.

For his tireless efforts on behalf of the Canadian pork industry and outstanding contributions to the agriculture and food industry, Howard has received numerous awards. He was Pork Producer of the Year for Durham County, named as Honourary Member of the Ontario Institute of Agrologists, received an award of recognition of service to the Ontario Pork industry and a Centennial Award from the Ministry of Agriculture and Food.