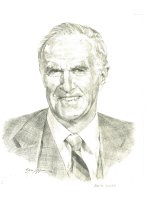 Nominated by: Junior Farmers’ Association of Ontario and the Miller Family

J. R. Ernest Miller, from Tayside Farm near Perth in Lanark County, made agriculture and the rural community better through 60 years of dedicated service in a variety of organizations representing young people, livestock, crops, co-operatives, genealogy and the church.

From 1934 when he won the CNE Shield as top novice judge and the Ottawa Exhibition where he claimed the Samuel Crooks Trophy, Ernie Miller was in demand as a livestock judge at Fall Fairs in Eastern Ontario and Western Quebec.

After seven years of active involvement in the Junior Farmers’, Ernie Miller decided to take on a more active farm role with his wife Evelyn at Tayside, which then was recognized for purebred Yorkshire swine, Shropshire sheep and registered Holsteins. After suffering a devastating loss of his entire herd to tuberculosis in 1948, Ernie and Tayside Farm rebuilt the dairy herd and in 1970 he was awarded the Master Breeder designation by the Holstein Friesian Association of Canada. One of the sires he produced (Tayside Pabst Rockman) became a popular choice among commercial breeders and Eastern Breeders Inc. shipped semen from that animal to every continent in the world. Mr. Miller was an active member of the local and national Holstein Associations for 45 years, serving on the executive in several capacities. A Malak Karsh photo of Ernie Miller holding a Holstein calf represented ‘farmers of the future’ in two Canadian farm magazines. Ernie chaired the Lanark County School Trustees Association and the Bathurst Area School Board when school districts were being consolidated. He also served as President of the Lanark Crop Improvement Association, Chairman of the Lanark Milk Committee and President of the Lanark Holstein Club. He became the recipient of the ‘Harris McNish Memorial Award’ for leadership in agriculture. He was also a board member of United Co-operatives of Ontario for 10 years.

Mr. Miller and 17 other farmers from across Ontario assisted the University of Guelph to develop CANFARM, a computerized farm record-keeping system for farmers. He published a history of the St. Andrew’s Presbyterian church on its 175th anniversary. Computerization of this material led to data on over 10,000 individuals being recorded and made available through the Kingston Branch of the Ontario Genealogical Society. The Kiwanis club presented the Mel Osbourne Fellowship, its highest honour for community service, to Ernie Miller for his work in establishing the Lanark Chapter of the Alzheimer’s Society.