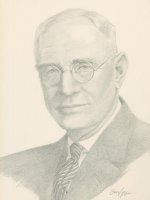 Born in Norfolk County and of United Empire Loyalist descent, James E. Johnson provided an important influence on the production and marketing of apples and other fruit throughout Ontario.

Early in life Mr. Johnson conceived a vision of Norfolk County as a fruit growing district for both tree fruits and small fruits. Through his organizing ability, James Johnson was instrumental in the formation of the Norfolk Fruit Growers’ Association and for more than a quarter of a century he served as its first manager. Largely due to his foresight and persistent efforts, the Association has become the largest apple producer organization in Eastern Canada.

In 1942, James Johnson was honoured with the Silver Apple Award presented by the Norfolk Fruit Growers’ Association.