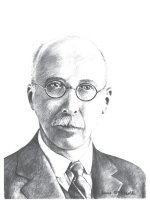 James J. Morrison was born on a farm south of Arthur in 1861. He ultimately became known as the “father of the Ontario Farm Movement” and hailed as a thinker ahead of his time. He spent the early part of his career as Secretary-Treasurer of The Dominion Grange and the Canadian Council of Agriculture before returning to take over the family farm and to make substantial contributions to the local community. During this time, he pondered what needed to be done to improve business and living conditions for farmers and rural communities and how to give rural people a strong voice in provincial and national affairs.

In 1914, J. J., as he was known, helped to create the United Farmers of Ontario (UFO) on the grounds that farmers and rural Ontario needed to work together to achieve the goals of good business and living conditions. The UFO grew rapidly and had 50,000 members by 1919 when it won the Ontario election. Morrison served as the Secretary-Treasurer and was a key organizer and promoter until 1933. While the UFO was in power, it initiated leading contributions to Ontario social legislation such as a Mothers Allowance Act, a Minimum Wage Act for Women, increased workers compensation benefits, increased rural electrification, the creation of the Province of Ontario Savings Office to lower lending rates to farmers, the introduction of the first major reforestation project in North America and the initiation of our modern system of highways.

Also in 1914, Morrison helped found the United Farmers Co-operative Company (now the Ontario Co-operative Association) to market farm products and negotiate fair prices for agricultural inputs such as fertilizer, petroleum and insurance services. By 1941, there were 91 affiliated co-operatives in Ontario.

In 1936, the UFO formed the Ontario Chamber of Agriculture now known as the Ontario Federation of Agriculture, and in 1941 the National Farm Radio Forum was established across Canada as an adult education program for farmers. Both of these initiatives resulted from the efforts of Morrison within the United Farmers of Ontario.

James also mentored the first Canadian woman elected to the Federal Parliament, Agnes Macphail, and in the 1940s James’ daughter Rae Luckock was elected as an MPP in the Ontario Legislature.