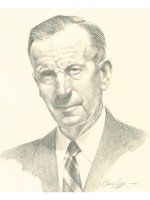 In 1911, James R. Henderson, with his father, was co-founder of the Strathaven herd of Holstein-Friesian cattle at Kingston, Ontario. This herd has had an enormous effect in the improvement of dairy cattle, particularly in Eastern Ontario.

He organized the first Championship Show in Eastern Ontario and was host for the first Twilight Meeting of the breed in Ontario.

James Henderson was awarded the Master Breeder Award by the National Association in 1941 and the Certificate of Superior Accomplishment in 1965. He was the first person to receive the McNish Award given to the person making the greatest contribution to agriculture in the 14 counties of Eastern Ontario.