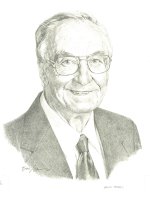 Nominated by: The Co-operators, Ontario Federation of Agriculture and Saugeen Valley Conservation Authority

James William Powers was born at Chepstow in Bruce County and dedicated his life to the betterment of community and country. He invested his entire career in farm organizations, adult education, policy development, orderly marketing, insurance, and conservation.

Jim Powers was an early leader in the Farm Radio Forum ‘revolution’. He organized the Chepstow West Line Farm Forum, the first of about one hundred he fostered over a fifteen-year period. He also organized folk schools and numerous local chapters of commodity organizations. Jim was elected Chair of the Ontario Farm Radio Forum Executive Committee, then Chair of the National Farm Radio Forum. He worked with representatives of the Canadian Federation of Agriculture, the Canadian Association for Adult Education and the Canadian Broadcasting Corporation to develop these forums across Canada. Radio forums provided the opportunity for farmers and rural folk to discuss the issues they faced and make recommendations to farm organizations for action. They also promoted hundreds of local action projects, including cooperatives, credit unions and a range of leadership training and community development initiatives. Mr. Powers was active in conducting plebiscites that led to the formation of marketing schemes for hogs and cream and the introduction of the Dutch Clock method of marketing.

As field man for the Federation of Agriculture, Jim was a driving force in the creation of the Bruce County Medical Services Co-operative, the model for county units insuring against medical expenses. Federation of these units into Co-operative Health Services of Ontario, set the pattern for health care services that later were absorbed by Medicare.

When Farm Forum discussions revealed the need for bond and transit insurance, the Federation of Agriculture joined others to provide these services. Mr. Powers set out to organize agencies in several counties. He understood the need for automobile and a full range of insurance. He became part of a provincial committee that created Co-operators’ Fidelity and Guarantee Association, which later became Co-operators Insurance Association Group and then Co-operators Insurance, a major insurance carrier in Canada. Jim Powers, a member of the Saugeen Valley Conservation Authority familiar with community pastures and their role in conservation, helped smaller farmers access grazing area. He was key to organizing an Agricultural Rehabilitation and Development Act committee to set up a 1200-acre model beef pasture project supported by the Ontario and Federal governments, the Federation of Agriculture and the Saugeen Valley Conservation Authority. He assisted in establishing three pasture farms for demonstrating wise land use management.

Jim Powers served on the Saugeen Valley Conservation Authority Water Management committee that developed a wetland acquisition strategy and plan for sustainable development of wetlands. Working with the Nature Conservancy of Canada, Jim helped to preserve areas of the Saugeen watershed to accommodate a variety of needs, including canoe stopovers, maple syrup demonstrations and camping sites. He was a fundraiser for the Saugeen Valley Conservation Foundation and was awarded the Conservation Award of Distinction. Jim Powers’ commitment to community is shown in a brief listing of his activities with the Bruce County International Plowing Match, County Planning Board, Farm Financial Advisory Program, Safety Committee, 4-H Committee, Farmer of the Year, and Chepstow Lion’s Club. He is author of four history books on the county.