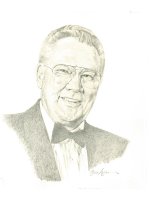 After World War II service in the Royal Canadian Air Force, John A. Stewart joined the Middlesex County family business and expanded the Stewart reputation for quality pedigreed cereal seed production and marketing. In 1947 he became a member of both the Canadian Seed Trade Association and Canadian Seed Growers’ Association.

In the 1950’s, recognized as an Associate Plant Breeder by the Canadian Seed Growers’ Association, he parlayed a few bushels of superior oats into millions of bushels through innovative methods. He obtained control of seed varieties such as Garry, Rodney and Russell oats, maintained pedigrees, increased seed in winter production nurseries in Mexico, and contracted multiplication plantings before releasing seed to the farming public in Canada and other countries.

The Canadian Seed Growers’ Association honoured John A. Stewart by naming him a Robertson Associate in 1960. During that year he became the first Chairman of the Agricultural Research Institute of Ontario, a position which he held for six years. He then became a member of the Board of Governors of the University of Guelph for six years followed by a three-year term on the Ontario Economic Council.

John A. Stewart was a founding member of SeCan. He promoted the concept of Breeder’s Rights, entered into private breeding of hybrid corn and established breeding plots in Jamaica and New Zealand.

In 1972, Mr. Stewart expanded into private cereal plant breeding using the then new ‘double haploid’ process, developed at his alma mater, the Ontario Agriculture College, University of Guelph, to speed the variety development in barley.

He was honoured by the Ontario Institute of Agrologists with the Distinguished Agrologist Award in 1979 and the Architect of Agriculture Award sponsored by Ciba-Geigy Ltd., in 1981.

The Canadian International Development Agency and the World Bank attracted John A. to a project in China which established the massive need for pedigreed seed production, processing and distribution in that country. John A. Stewart served as a member of the North Middlesex District High School Board and Chair of the Advisory Committee for Agricultural Education at Ridgetown College of Agricultural Technology during the 1970s. He was recognized for his contributions to 4-H, Junior Farmers, Middlesex County Soil & Crop Improvement Association, the Canadian Legion, his church, and Canada’s centennial events.