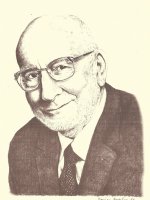 John C. Benham has been acknowledged as an excellent farmer, an agriculturalist, an environmentalist and an economist who was always one step ahead of the Industry.

He graduated from OAC in 1951, and became a dairy farmer who made his mark breeding top quality cows, whose health and production status were enhanced by a J.C. Benham-devised ration containing alfalfa with maximized protein, ADF and NDF content. John was an early adopter of new crop production practices such as pure seeding of alfalfa as a high protein source for cattle, ensiling whole cob high moisture corn and designing his own mineral supplement. He then helped to educate others across Ontario by regularly hosting at his farm Crop Science and Animal Science students from OAC, 4-H clubs, judging competitions, and OVC researchers looking into the links between nutrition and herd health issues.

He went on to become a member of the Field Crops Committee of the Royal Agricultural Winter Fair, where he helped to reorganize the structure of the forage and hay classes, with entries placed on the basis of chemical analysis for protein and fiber content. A new horse hay class was also introduced to take into consideration the nutritional needs of horses for breeding and performance. All of this went a long way to educating Ontario farmers about the value of new crop production practices and the importance of livestock nutrition. However, his innovation did not stop there.

On his own farm, he was an early adopter of soil erosion control techniques; of the utilization of manure as a substitute for commercial fertilizer; and of sound woodlot management techniques. In fact, he presented information at major conferences on the environmental and economic benefits of woodlot management.

In recognition of this service to agriculture, in 1974 he was awarded the OAC Centennial Medal as one of 100 of Ontario’s most important contributors to agriculture.

Off-farm, John Benham worked with a variety of organizations to enhance good agricultural practices and practical training opportunities for producers. He was one of the first fieldmen for the Ontario Land Stewardship Program, which was a forerunner of the Ontario Soil and Crop Improvement Association’s Environmental Farm Plan. Much of the growing success of the EFP has been due to John’s enthusiasm and hard work as an administrator, organizer and teacher. He is a Director and Past President of the OSCIA, as well as one of the founders of both the Ontario Forage Council and the Canadian Forage Council, organizations which work across Ontario and Canada to promote excellent forages as key entities in good livestock nutrition and soil enrichment.

As the Weed Inspector for Wellington County, operating under the Weed Control Act, John Benham has done much to train weed inspectors from other jurisdictions. He is also a founder and Board member of the Ontario Invasive Plant Council which works to prevent the spread of new and damaging weed species such as the Giant Hog Weed.

John is also the Wellington County Tree Commissioner, and ,as in so many of the issues in which he becomes involved, lessons that are learned on-farm or at the County level, lead to provincial application.

John C. Benham is an excellent example of a highly motivated, innovative grower/producer who contributes exponentially to the growth and development of Ontario and Canadian agriculture through his commitment, hard work, and willingness to share his information and experience with others.