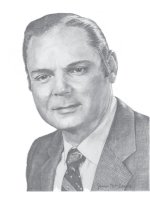 Jack Riddell’s background in agriculture and agribusiness served as the perfect training ground for a future Ontario Minister of Agriculture.

Upon his return to Ontario, he raised sheep and cattle on 200 acres in Huron, and also taught high school agriculture. He later owned and operated a Livestock Sales Barn and worked as an auctioneer. Throughout all these iterations, he became concerned about the long-term viability of the family farm in Ontario and was inspired to run for the Ontario Liberals in 1973 in Huron-Middlesex. He was elected, and as Agriculture Critic for the party, he dealt with a number of issues including foreign ownership of agricultural land and the unfair demands of discounts and allowances from the suppliers to the food industry.

In 1985, Jack Riddell became Minister of Agriculture and Food and his innovation and vision for agriculture led to the introduction of over 30 new agriculture programs for farmers, nearly doubling the agriculture budget. He introduced the Ontario Family Farm Interest Rate Reduction program to reduce interest payments which had climbed to over 20%.

During Jack’s tenure as Minister, OMAF headquarters were moved to Guelph; the Farm Start program was implemented; a tripartite income stabilization agreement was signed with the Federal government and producers; and Right-to-Farm legislation was passed. He then formed an Agriculture Caucus Committee consisting of rural MPPs analyzing rural issues in order to develop long-term policies to sustain a viable agricultural industry in Ontario. One of those policies was a $30 million Land Stewardship program focused on soil conservation initially, and kickstarting the conservation movement on Ontario farms.

Certainly, John (Jack) Keith Riddell effectively used his knowledge of Ontario agriculture to implement many programs that have helped to sustain and advance the agriculture sector throughout the Province.

As a tribute to his many contributions to Ontario agriculture, Jack Riddell is being inducted into the Ontario Agricultural Hall of Fame.