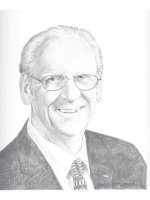 Nominated by: Chicken Farmers of Ontario

John Maaskant began his farming career at the age of sixteen, and since then he has been extensively involved in many agricultural organizations, acknowledged for his strategic leadership and consensus building skills.

John was first elected to the Chicken Farmers of Ontario Board in 1989. By 1991 he was the First Vice Chair, and from 1992 to 1995, he served as the Chair. These years were a formative period for Canadian agriculture, with the striking of free trade agreements such as Canada US Trade Agreement and then the North American Free Trade Agreement, and the creation of the World Trade Organization. John’s leadership in the supply managed broiler industry, as a well versed and vocal advocate of supply management, helped to ensure the ongoing stability and growth of the industry.

Then, in 1997, he joined the Board of the Ontario Farm Animal Council (OFAC), an organization struggling to positively position the livestock and poultry industries in the face of anti farmed animal activists. In 2003, John became the Chair of OFAC and successfully convinced the organization to forego its reactive communications strategy in favour of a proactive stance emphasizing the compelling story of modern agriculture and its excellent animal care standards.

In 2010, John was a founding member of Farm and Food Care Ontario (FFCO) and Farm and Food Care Canada (FFCC), and became the inaugural Chair of FFCO. Under his leadership, the key segments of the agrifood supply chain (producers of field crops, horticulture, livestock and poultry alongside the restaurant sector and the retail food service sector) all united to give consumers a factual picture of the entire, impressive agrifood industry. The awareness of the importance of outreach to consumers is growing, and many other countries are adopting the approach of uniting the entire supply chain in this ongoing effort.

Finally, John as Chair of OFAC, joined the Ontario Federation of Agriculture, AGCare and the Christian Farmers Federation of Ontario to create the Ontario Farm Environmental Coalition (OFEC) to deal with environmental sustainability on farms. As the OFEC Co-Chair, John advocated for reasonable environmental regulations, and one of the major results was the creation of the Environmental Farm Plan (EFP) model. EFPs are still employed by farmers today to ensure that they can implement effective sustainability planning throughout their entire operations.

As a result of these efforts and others, John Maaskant is worthy of recognition as an Inductee into the Ontario Agricultural Hall of Fame.