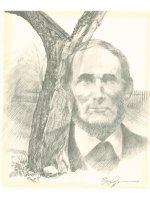 The McIntosh apple has become the most widely grown variety in Canada. It is uniquely Canadian, originating with one small, second growth tree found on the Dundela, Dundas County farm taken over by John McIntosh when he migrated from the United States in 1796.

John McIntosh fostered and protected the tree, and succeeding generations of his family have perpetuated the species. John’s son Allan learned to bud and graft fruit trees, and he travelled about as an itinerant preacher, handing seedlings to those interested. He and his brother Sandy organized a small nursery which Allan’s son, Harvey Austin, expanded into a commercial enterprise marketing thousands of seedlings throughout the province.

Another McIntosh, Dr. P. A. McIntosh of Spencerville carried on the nursery activities, shipping trees to Scotland, England and Rhodesia. The original tree lived until 1908. In 1912 a monument was erected at Dundela recognizing this important contribution to Ontario agriculture.