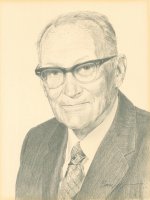 “Jack” Fraser was a master breeder of Holstein-Friesian cattle. Founded in 1928, his Spring Farm herd at Streetsville had a world-wide reputation for quality that had a profound influence on the breed. He exhibited Holsteins for half a century, winning more Premier Breeder and Premier Exhibitor awards at the Canadian National Exhibition than did any other breeder.

He also made a great contribution as a judge of dairy cattle. He served in this capacity throughout North America and around the world. The Spring Farm herd has been used for over 30 years for the training of dairy cattle judging teams and for the teaching of agricultural students in general.