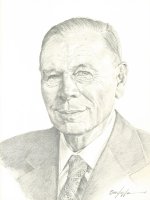 Elgin Armstrong exemplified the very best of the entrepreneurs who built modern Canada.

His selection for the A.B.C. Holsteins, Brampton, Ontario was so successful that he left his mark on the breed throughout North America and many other parts of the world. A.B.C. Reflection Sovereign, a bull bred at A.B.C, had tremendous impact on modern Holstein breed improvements. Mr. Armstrong also was among the first to appreciate the potential of alfalfa and exhibited his seed at the first Royal Agricultural Winter Fair.

Elgin’s first love was Standardbred horses and he laid the foundation for what is now the leading Standardbred breeding farm in Canada. In 1985, horses of Armstrong breeding ranked second for winnings in North America and second the list of breeders of 2 and 3 year old performers.

Elgin Armstrong was named to the first Canadian Racing Hall of Fame in 1976 and the Brampton Sports Hall of Fame in 1964. He served as Trustee of the Ontario Jockey Club Vice-President of the Canadian Trotting Association, as well as Director of the Hambletonian Society, Canadian Standardbred Breeder’s Association and the Hall of Fame of the Trotters.