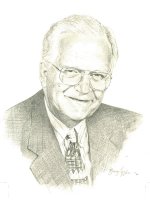 From his roots on a Holstein farm in Waterloo County to his advancement of artificial insemination and his leading role in the Ontario Holstein Branch, Joseph Snyder advanced the Holstein breed and the productivity of Ontario dairy farmers for 43 years.

Joe Snyder was Assistant Manager of the Waterloo Cattle Breeding Association in the 1950’s when the use of frozen semen was first developed. This cattle breeding unit was the first artificial insemination (A.I.) organization in the world to use frozen semen exclusively. The Waterloo A.I. Unit was the forerunner of United Breeders Inc., and the present Gencor organization. As editor of this unit’s “Better Bovine Bulletin”, Joe extolled the benefits of artificial insemination, use of frozen semen and the breed improvement programs of milk recording and classification. His convictions and steadfast promotion of these programs certainly made a tremendous impact on the Canadian dairy cattle breeding industry and helped position Ontario and Canada as the world leaders in dairy cattle genetics.

In 1980, Joe was appointed Secretary-Manager of the newly formed Ontario Holstein Branch and was responsible for the administration and development of the provincial organization. His work on corrective mating for a particular cow in order to achieve maximum improvement was the precursor of the present day computerized mating system, which has become widely used in the dairy cattle breeding industry.

Joe organized the first dairy cattle judging conference to involve all interested dairy farmers. The open judging conferences have developed a greater understanding of the confirmation traits as they relate to the functional and economical dairy cow admired by both the purebred breeder and commercial dairyman alike.

Joe Snyder served for many years on the Ontario Dairy Extension Task Force, which made numerous sound recommendations regarding future dairy industry extension programs for the province. He also co-ordinated the participation of Ontario Holstein breeders in the World Dairy Expo where Ontario breeders won the prestigious Holstein State Herd Class 12 of 13 years and established Ontario as a leader in global Holstein genetics.

The Ontario Government delegated Joe to go to Cuba, in the 1970’s, to organize judging conferences and livestock shows to further exportation of Ontario Holsteins to that Country. Holstein Canada also sent him to Spain on two different occasions to conduct similar programs in support of Holstein marketing possibilities in that country.

He was a founding committee member of the Ontario 4-H inter-County Dairy Cattle Judging Competition. This yearly competition selects four dairy calf club members as the team to represent Ontario at the National 4-H judging Competition during the World Dairy Expo. He was also a committee member of the first Contact Hays Classic. This 4-H dairy calf show is now known as the Scotiabank Classic and has become the largest and most prestigious dairy calf youth event in the world. He served as a member of the organizing committee to initiate the first United Breeders Silver Dollar Competition, now known as the Gencor Challenge. There are approximately 300 Ontario 4-H’ers participating in these competitions.

He also designed the Ontario Distinguished Achievement Award that recognizes Ontario dairy youth who are actively involved in dairy farming. Joe served on the Ontario Mennonite Relief Heifer Sale Committee for 20 years, 14 years as Chairman. During that time this committee raised over 2 million dollars for world relief efforts. He has also served on committees of the Waterloo County Junior Farmers, the Elmira Agricultural Society, the Elmira Minor Hockey Association, Fairview Mennonite Home, Ontario Mennonite Mission Board, and as a Past President of the Ontario Agricultural Hall of Fame Association, to name a few.

Joe Snyder’s excellent communication skills, attention to details, as well as his high moral values and integrity are very evident in all of the programs and events he was involved with during his 43 years of service to the Ontario Dairy Industry.