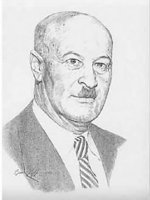 A refugee from Nazi oppression, Karl Abeles transplanted his love for agriculture to his adopted country and through his efforts created a new awareness of the value of improved pastures.

Mr. Abeles was born in Hlas, Czechoslovakia, graduated from the Agricultural College of Kaaden, and farmed 2,000 acres with his father in his native Bohemia. Here he developed his interest in improved, or as he put it, permanent pasture” mixtures.

He arrived In Canada in 1938 and settled near Brantford, Ontario. With no capital and limited English, he quickly established himself on a small farm, which rapidly expanded. Oak Park Farm became his demonstration farm and he ranged far and wide across the province with missionary zeal preaching the "gospel' of permanent or improved pastures.

His Greenlands Pasture Mixtures transformed thousands of acres of ordinary fields into highly productive hay and pasture crops. When he died 11 1954, F E Elis, a renowned agricultural journalist wrote: “He sold an idea, and when the history of grass farming in Ontario is written, the name Karl Abeles is entitled to a leading place”.