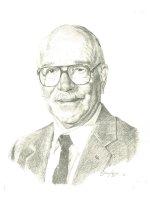 Keith Collver had a distinguished career as one of the premiere marketers of horticultural products in Canada, and invested much of his life’s work representing grower’s interests on the provincial, national and international level. Mr. Collver managed the Norfolk Fruit Growers’ Association in Norfolk County from 1963 until his retirement in 1991. Under his guidance, the Association’s production experienced a fivefold increase and became one of the largest and most modern packing houses in Eastern Canada. During his tenure with the Association, he also held the positions of Director, Secretary, Treasurer and Vice President. As President of the Canadian Horticultural Council in 1980, and Board Member of the Ontario Fruit and Vegetable Growers’ Association, from 1963 to 1985, Keith continuously tried to balance the needs of the grower and the needs of the marketplace and bring the two closer together.

In the early 1960’s, he led the change from apple orchard boxes to bins, as well as encouraged his members to move towards semi-dwarf trees in the late 1960’s. This change made picking, pruning and spraying much easier than for the standard trees. He saw the advantages to adopting controlled atmosphere storage that led to the introduction of ultra low oxygen storage to the industry in the late 1970’s. Keith was instrumental in introducing the Empire apple to the United Kingdom market. Today that apple accounts for 85% of the apple exports from Ontario to the UK.

Mr. Collver was involved when the apple industry explored the concept of supply management. He sat on the steering committee of the five apple producing provinces and helped to draft the structure of an agreement for the industry to consider. From 1969 to 1983 he chaired the Pricing Committee that established minimum prices for both the fresh and juice apple markets thereby creating stability in the Ontario market. He was the founding Chairman of the Ontario Strawberry Council and spearheaded the establishment of the “8000 quart Club” which encouraged improvements in strawberry production.

Whether contributing to the various producer boards or advising both the Provincial and Federal governments on horticultural issues, his input was always welcomed and appreciated. In 1981, he received the Uniroyal “Golden Apple Award” in recognition of his contribution to the Apple Industry in North America.

Mr. Collver served in various capacities on many other boards, associations and organizations. Some of these included the Ontario Apple Marketing Commission, the Fresh for Flavour Foundation, the Ontario Food Terminal, the Ontario Institute of Agrologists, the International Apple Institute, the Agricultural Research Institute of Ontario, the Simcoe Board of Education, the Simcoe Rotary Club, and the Long Point Foundation.

Keith Collver was a unique individual in the horticultural industry of Ontario and Canada. His vision of the industry, and curiosity of how things worked and how they could be made better, resulted in many improvements to the industry.