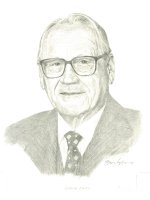 Nominated by:  Canadian National Exhibition Association and the Kent County Federation of Agriculture

Kenneth Lantz rose through the ranks from Assistant Agricultural Representative to the post of Deputy Minister of the Ontario Ministry of Agriculture and Food (OMAF). He served as Director of Extension and supervised the 54 county and district offices of the Ministry. There he established the Farm Business Management Program as a vital dimension of the Agriculture Ministry’s service to commercial farmers. Ken’s dedication was acknowledged by the International Farm Business Management Association when Ontario was selected to host the 2nd World Congress with Ken as Chair of the Steering Committee.

During the first six years when Crop Insurance was becoming established in Ontario, Ken Lantz served as Chair of the Commission to bring crop insurance to producers. Mr. Lantz established the Food Land Development Branch within OMAF leading to Food Land Guidelines which encouraged preservation of farmland.

Ken Lantz contributed his expertise and influence to organizing the Ontario Agricultural Services Co-ordinating Committee and the Agricultural Research Institute of Ontario which assist in guiding the effective funding of research programs.

Mr. Lantz guided an expanding active province wide 4-H program and served on the directorate of the Canadian Council of 4-H Clubs.

Ken Lantz served on every major committee of the Canadian National Exhibition ensuring that agriculture maintained a presence at the show. He also served as it’s President. He is an Honourary Life Member of the Canadian Seed Growers’ Association and the Canadian Society of Rural Extension. He was named a “Fellow” of the Agricultural Institute of Canada, it’s highest award for a Professional Agriculturist. Throughout his long and distinguished career, Ken Lantz committed his outstanding administrative skills to the advancement of Ontario agriculture.