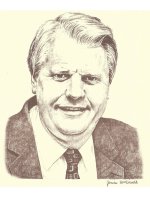 Ken Knox was raised on a dairy farm, and upon graduation from OAC in 1972, he joined OMAFRA as an assistant agricultural representative, and continued with OMAFRA over the years to work with Youth Programs, the Ontario Farm Adjustment Assistant Program, as Assistant Deputy Minister, and as Deputy Minister. But Ken’s vision and abilities extended far beyond being a capable administrator. The story of his dedication to Ontario agriculture is a tribute to his unwavering determination that the value of agriculture to this province would never be allowed to be undermined, no matter what plans transpired to diminish it. His ability was to see potential new ventures and structures for agriculture and agribusiness, and to strategically gather the forces required to make things happen. This puts Ken Knox in the ranks of the rare few who work for positive change by motivating and enabling the best among us, with little desire on his part for public recognition.

During the eras of public service downsizing, Ken was instrumental in designing creative ways to ensure that the most crucial agricultural structures and programs were adapted but still maintained. For example, the Rural Organizations and Services Branch was devised to retain some of the key agriculture and rural extension services which had suffered major cuts in the 1980’s. Similarly, Ken’s recognition of the value of extension and education programs for rural youth, facilitated the development of an independently funded 4-H organization, with OMAFRA still providing some financial support. He was also the driver behind the creation of the Advanced Agricultural Leadership Program, and was directly involved with the creation of Agricorp as a non-governmental organization to manage crop insurance and other risk management programs. The transfer of the CAT colleges of Ridgetown, Kemptville and Alfred to the University of Guelph was initiated by Ken Knox as the Deputy Minister. While there was concern about this transition at the time, it has allowed these three colleges not only to survive, but to flourish with new programs, new funding, more students and enhanced research mandates.

Another major achievement by Ken Knox as Deputy Minister was the transformation of the farm property tax rebate program into a permanent reduced-property-tax-assessment program for farmland and farm buildings, which ensured its preservation. A further initiative resulting directly from Ken’s vision and involvement was Agriculture in the Classroom, now known as Ontario Agri-Food Education.

Outside the public service, Ken continued his energetic and visionary influence. He was the founding CEO of the Ontario Genomics Institute; the President and CEO of the Innovation Institute of Ontario; the President and CEO of the Ontario Innovation Trust; the Founding Director of the Canadian Agri-Food Policy Institute; the first General Manager of MaRS Discovery District; and a Board member of the Ontario Bio Council, the Ontario Science and Innovation Council, the Ontario Research and Challenge Fund, and the Vineland Research and Innovation Centre. He played a crucial role in the formation of Ontario Agri-Food Technologies, and assisted in structuring the Ontario BioAuto Council. He also played a role in the creation of many other organizations and initiatives, and in 2006 he received the Toronto Biotechnology Initiative Community Recognition Award, and then in 2008, received the Ontario Amethyst Award for lifetime achievement in the Public Service.

He continues his valuable involvement in Ontario agriculture today as Chair of the Departmental Audit Committee of the Canadian Food Inspection Agency, as an advisor to agricultural associations and as owner of a 500 acre cash crop and pumpkin farm, and the Knox/First Start Acres Percherons.

The nomination of Ken Knox was accompanied by many letters of support from agriculturalists, farmers, scientists, agribusinesses, civil servants, and leaders and achievers throughout Ontario. There is common agreement that Ken Knox is a remarkable visionary, strongly rooted in Ontario agriculture and a man who is truly deserving of induction into the Ontario Agricultural Hall of Fame.