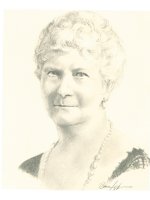 Mrs. Laura Rose Stephen, born in Georgetown, was a pioneer in the movement towards better nutrition and health, particularly in the rural home. After a short time teaching, she returned to Ontario to become the first “lady instructor” in dairying at the OAC in 1898. For 13 years she taught sanitation, careful food preparation and preservation. Her book, “FARM DAIRYING” became a standard text, running through four editions. She was a popular judge at fairs.

A speaker of charm and wit, she traveled widely and was particularly active in the early years of the Women’s Institute movement. It was Laura Rose who designed their crest and suggested their motto.

After her marriage in 1911, she continued to organize and instruct, retaining her maiden name. She organized institutes in five provinces and, in 1930, was the Canadian government delegate to the first international conference of women’s organizations from which came the Associated Countrywomen of the World.

A prolific writer, she was a regular columnist in farm journals.

Her influence for good upon home life of rural families was immeasurable.