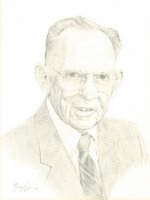 Lawrence Kerr’s lifelong dedication to agriculture is rooted in Kent County. Educated in local schools and graduating from O.A.C. in 1929 with a B.S.A., he served for five years as assistant and acting Agricultural Representatives in several counties in Central and Eastern Ontario.

Upon his return to farming in Kent, Mr. Kerr began to build an outstanding mixed operation and was an inspiration to others, leading by example. He was actively involved in many organizations at the county level including the Soil and Crop Improvement Association, the Howard Fraleigh Grass Club, the Hog Producers’ Association and the Ontario Federation of Agriculture. Lawrence Kerr worked closely with the Ontario Ministry of Agriculture and Food and the Ontario Agricultural College, promoting the adoption of contemporary production and conservation techniques.

For his relentless dedication to the industry and his community he has been honoured with local, national and international awards. Mr. Kerr’s keen insight and expansive knowledge have been tapped for input to task forces and studies focusing on production, marketing and education.

Lawrence Kerr has been an active promoter of the value and the quality of educational programs delivered by the Ontario Agricultural College. As a member of the O.A.C. Advisory Committee and later Vice Chairman of the Board of Regents of the Federated Colleges, he helped steer the college on its path to becoming the University of Guelph. He served on the first Board of Governors for five years and was made a Fellow of the University in 1973.