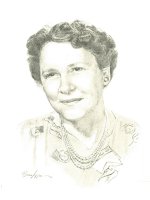 Nominated by: Barbara B. Skipper

Birdell Hind worked tirelessly and with enthusiasm for farm women and rural families to pool their efforts and improve their quality of life. She recruited farmers and their wives to band together to purchase farm inputs and household goods through the United Co-operative Stores. The strategy of co-operative enterprise and consolidated purchasing produced cost savings and dividends for rural families.

As an active member of the United Farm Women of Ontario for over 45 years Mrs. Hind used this organization and every network available to encourage farm women to actively engage in community processes and organizations as an effective way for their voices to be heard and to address rural community issues in the early 1920’s and 1930’s. “Organization is the master key that will unlock communities to a richer rural life”, she said. She taught rural women how to manage their homes in ways to improve their ability to care for their families.

Using the United Farm Women’s group as a medium, Mrs. Hind became President of the Board of Directors of the United Farmers of Ontario for Kent County, and later Provincial President of that body. She became Leader, Director and Organizer of the United Farm Young People’s groups in Kent County. In 1935 Mrs. Hind became Provincial President of the United Farm Women of Ontario, a position she held for 3 years. During this period she traveled across Ontario organizing new clubs wherever there was interest. Birdell Hind rallied women to demand that the government properly label canned goods. Being informed of the contents and nutritional facts of canned products enabled women to prepare meals that were more nutritionally balanced and thereby improved the level of health of family members. She worked to establish policies requiring all bread offered for sale, to be wrapped. She educated farm women on methods to improve sanitation and water conditions in their homes.

Mrs. Hind was instrumental in encouraging women to participate in their children’s education. She also encouraged women to attend School Board meetings to share their knowledge and experience with Trustees and to offer suggestions to improve school facilities for the sake of their children’s health and wellbeing. As a result of this interest she became the first woman Secretary for her local School Board in 1934. In the 1930’s urban schools had medical officers but rural schools did not so Mrs. Hind led fundraising activities to bring school health services to the rural children. She was able to get a local “rural tonsil clinic” established. Other counties soon adopted this initiative. Through Mrs. Hind’s efforts, the “rural tonsil clinic” program was eventually sponsored by the Ministry of Health.

Birdell Hind organized the first Local Council of Women in Chatham, and became its first President in 1936. This group was made up of a representative from each community organization and therefore became a powerful voice for women’s concerns in those days. Mrs. Hind was an energetic, enthusiastic and eloquent speaker. As an avid community supporter she served on the Chatham Community Chest and worked diligently for the Dover Centre United Church. Over the years she contributed articles to the Rural Cooperator and Farmer’s Advocate papers. Birdell was a guest speaker at the 1935 United Farmers of Ontario Convention (the political arm of the Co-operative Movement) in Toronto. This was a significant accomplishment since the convention was an all men’s event and she was only 35 years old. In 1998 she was inducted into the Kent County Agricultural Hall of Fame.