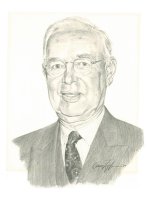 As Secretary-Treasurer of the Ontario Fruit and Vegetable Growers’ Association (1946-1959) and Editor of The Grower magazine (1952-1972), Bobby Robinson was an influential spokesman for the industry.

Starting with his own market garden in Burlington, Ontario, in 1920, he moved on to become Secretary of the first Ontario Food Council (1940-1957), and President of the Canadian Horticultural Council in 1957. The establishment of the Ontario Food Terminal was largely due to his efforts and he was a board member from 1946-1957.

He was a tenacious and sometimes controversial proponent of group action by growers, and he influenced greatly the merger of the Ontario Fruit and Ontario Vegetable Growers’ Associations into one strong organization. An advocate of orderly marketing, he helped establish the Asparagus Growers’ Marketing Board, the first such board in Ontario.

He was awarded an Award of Merit by the Ontario Fruit and Vegetable Growers’ Association in 1952 and the Canadian Horticultural Council in 1972.