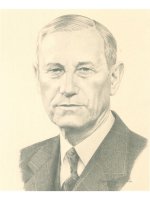 Mackenzie Robertson was a native of St. Vincent Township in Grey County. Educated in Meaford Schools, he obtained an Associate Diploma from the Ontario Agricultural College (OAC) in Guelph in 1898. Upon graduation he entered the dairy industry.

After serving creameries in the St. Marys area at the turn of the century “Mack” attended and graduated from the OAC Dairy School and joined the staff of the Ontario Department of Agriculture as creamery instructor at the OAC Dairy School. In 1914 he established the successful Belleville Creameries with branches in Bancroft, Napanee, Kingston and Sharbot Lake. He later acquired and operated Land O’Lanark Creameries at Perth, Trenton Dairies at Trenton and Prince Edward Dairies at Picton. In 1917 he became a founding member and the first president of the Canadian Creamerymen’s Association of Ontario and was a founding member of the National Dairy Council of Canada.

Mackenzie Robertson was instrumental in bringing about legislation in Ontario making mandatory the grading of cream, the settlement of cream on the basis of grade, and the adoption of the Babcock Test as a means of that test. He was influential in having pasteurization of cream for butter making made mandatory in Ontario.

After his death in 1957, the Ontario Creamerymen’s Association, at their 50th Convention in 1965, said: “He was a man of great integrity and determination, who left an indelible mark on the development of the Creamery Butter Industry in Ontario”.