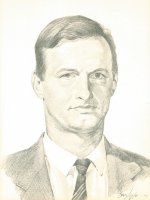 Recognized as a true innovator and farm leader, Malcolm Davidson made a deep and lasting impact on Ontario Agriculture in a short space of time.

Following service in the British Paratroop Regiment, Malcolm settled in Brucefield, Huron County, Ontario, and established a farming operation that included beef cattle, white beans, corn and a minimum disease farrow-to-finish hog enterprise. He was one of the first people to realize the potential of minimal disease hogs and was co-founder of the Ontario Specific Pathogen Free (SPF) Association.

During the early 1960’s he became a director of Hensall District Co-op and guided the development of that organization to become one of Ontario’s largest and most profitable farm supply and grain co-operatives.

Recognition of his outstanding ability came when Agriculture and Food Minister, William Stewart named him to the government’s Farm Income Committee in 1966. The committee report, Challenge of Abundance, made supply management and the marketing board approach respectable. Convinced that fragmentation among farm groups was part of the farm problem, he was appointed chairman of the Ontario Federation of Agriculture’s General Farm Organization Committee in 1969. After being named to the OFA’s Executive Committee, his goals of individual membership and a direct grassroots voice were soon achieved.

Malcolm’s drive and enthusiasm went beyond Ontario. He developed a Jesuit-run farm program in India and of particular importance to him were the missionaries’ valiant attempts to impart agricultural technology to the local population.