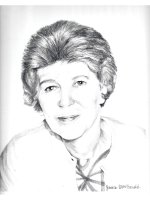 Nominated by: Martin Pick, Retired Executive of the Pickseed Group of Companies

Marie Pick, along with her husband Otto, baby son Thomas and Marie’s sister Ludmilla arrived in Canada in 1938 from Czechoslovakia. In 1947, Otto and Marie established Otto Pick, Agricultural Service to promote advanced pasturing systems based on seed mixtures involving varying maturing legumes and grasses, such as Brome grass and Orchard grass; 2 species relatively obscure in Ontario agriculture. Otto’s experience farming in Bohemia and Marie’s agricultural school education gave them a clear vision of this opportunity. As the business grew in those early years, Marie took over the full administrative and accounting responsibilities and financial management. She maintained this administrative role until her retirement in 1980.

When Otto Pick died suddenly in 1959, Marie, along with her two sons Tom and Martin assumed operation of the business. Marie’s steady financial management resulted in fiscal stability and strong balance sheets, a vital fact in enabling strong and aggressive expansion. In 1960, activity expanded to include seed purchases and contracting in Manitoba. The strong financial condition of the company projected confidence with these large and sophisticated western seed growers.

The company was also developing a major presence with the sod production and turfgrass industry in eastern Canada. Some of these participants depended on their suppliers providing capital. Marie maintained oversight on these large and sometimes tenuous accounts. In 1970, the company established Pickseed West in Oregon, the world’s largest seed production region. Recently the combined companies supplied the seed for the football pitches for the South Africa, Brazilian and Russian World Cup tournaments. Over this period the company grew to be the largest company in this field in Canada and among the top 5 globally.

In 2013, DFL Trifolium, a Danish seed company and the world’s leader in this field acquired the Pickseed Group of Companies.

Marie Pick’s hard work in those early years gave the company the solid roots enabling growth through expansion and acquisition. Her development of qualified administrative staff gave confidence in the bold moves that let the company to become a powerhouse in the Canadian seed industry.