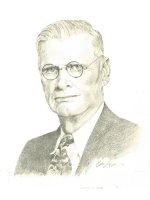 Nominated by: Larry Drew and Family

Mr. Drew was a founding Director of the Ontario Sugar Beet Producers’ Marketing Board, established in 1942. He helped the sugar beet industry develop one of the best contracts on the continent, laying the foundation for recovery of this country’s largest agricultural business enterprise of the day. His honesty and good judgement were above reproach.

Mr. Drew devoted considerable attention to the scientific side of tobacco culture. The Burley Board, of which he was director for 4 years and chair for ten years, actively supported early research in soils, crops and insects. He supported the Chatham Entomology Lab, Harrow Research Station and Western Ontario Agricultural School at Ridgetown.

Martin Drew was a strong spokesperson for producers, and acted as a mediator when necessary. He was tough, but fair, and his integrity was recognized by producers and processors. Mr. Drew had faith in free enterprise and was determined that farm groups should be unions of men working toward common objectives. His leadership in this area attracted violent political opposition at a time of great agricultural unrest. He encouraged young people to be involved in organized agriculture.

Martin Drew served twenty-five years as secretary of the Horticultural Society, was a member of the telephone company and supported the Federation of Agriculture. Mr. Drew gave many displaced European families their start in Canada at his farm and in his ‘home’. He was devoted to his family of 12 and was an active participant in his church.

Martin Drew is recognized as one of this Province’s “pioneer agriculturists”.