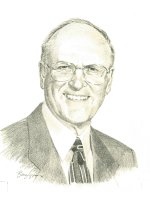 Murray Gaunt provided a strong voice for the agriculture community in his roles as farm news broadcaster, member of the Ontario Legislature, and agricultural commodity group leader for over forty years. Mr. Gaunt was elected to the Provincial Legislature in 1962. During his 19 years in the Legislature he served in a number of key leadership positions such as Chair of the Ontario Liberal Caucus, Chair of the Standing Committees of General Government and Social Development and was a member of numerous select committees and two special standing committees. During this time he was instrumental in enacting legislation that set the course of agriculture. He was an advocate of the Capital Grants program for farmers in the 1960’s. He persuaded the Liberal Caucus to support the 1966 Milk Act that led to the establishment of the Ontario Milk Marketing Board. He used his position as Agricultural Critic to add support to the creation of other supply management boards such as the Ontario Egg Producers’ Marketing Board and the Chicken Producers’ Marketing Board.

For many years Murray Gaunt served rural communities and agriculture through his vibrant and cheerful personality on CKNX radio and television as Farm Director. He was instrumental in the redevelopment of several broadcast programs and media material. He carried the agricultural message across the Province and Nationally. His focus was always on people. Through his daily news, market and special reports he kept the issues of agriculture and rural communities before decision makers and in so doing was a catalyst advancing the health and wellbeing of rural people. He left a legacy in the industry by serving as mentor to many professionals in the agricultural media today.

As Chairman of the Ontario Broiler Hatching Egg and Chick Commission Murray Gaunt steered this organization from conception to maturity with competence, skill and leadership. His honest, forthright manner, sense of humour and conciliation skills guided the people and resolved the issues of the day. In 2002, at the end of his 16 years as Chair, the Commission represents 106 farmers producing 208 million hatching eggs annually or 31 per cent of the National market.

Murray has also served agriculture by his work on the Ontario Beef Marketing Commission in 1984 and the Ontario Federation of Agriculture’s Special Task Force studying the effect of high interest rates on farm families and role the Provincial Government should play to lessen the impact. He also wrote a history book on the first 25 years of the Ontario Broiler Hatching Egg and Chick Commission.

Mr. Gaunt has served rural communities in other ways. As an agriculture diploma graduate, Class of ‘56A of the Ontario Agriculture College, Murray has acted as a volunteer fundraiser for the University of Guelph. He served as a Director and President on the Ontario Agricultural Hall of Fame Board and is a Director of Country Heritage Park. In addition he has served on boards and fundraised for the Wingham and District Hospital Foundation and several rural organizations including the Federated Women’s Institutes of Ontario, the Huron County United Way, the Wingham Lion’s Club and St. Andrew’s Presbyterian Church. Mr. Gaunt has received recognition awards for his writing including twice receiving the Tom Leach Gold Award from the Canadian Farm Writers Federation. Among his many honours Murray Gaunt was the recipient of the Queen’s Guineas at the 1955 Royal Winter Fair and was awarded Ontario’s Bicentennial Certificate of Merit in recognition of his contributions to agriculture and related activities.