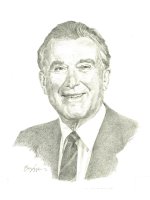 Norval Richard Richards, originally from Bruce County, graduated from the Ontario Agricultural College (O.A.C.) with a B.S.A. and was employed as a soil surveyor from 1938 to 1951. He was instrumental in building a strong soil survey unit in Ontario that classified and mapped soils on their capability for various uses including agriculture. He co-ordinated the work of four survey teams contributing to the Canada Land Inventory, which continues as a basis for government policy relating to land use. Dr. Richards authored three of Ontario’s county soil reports and edited twelve others.

Beginning in 1950, “Rick” Richards chaired the Department of Soils at the Ontario Agricultural College that played a key role in developing new facilities including a new soils building in 1959. It was renamed the Richards Building in 1989 in recognition of his influence in basing soil studies on a scientific approach. The department itself was renamed the Department of Soil Science. It developed the fertilizer requirement tables for the major field crops in the province. Under the leadership of Dr. Richards a large expansion occurred in soil conservation, soil testing, farmland use planning and the preservation of good agricultural land all of which have had a significant impact on Ontario agriculture since that time.

Dr. Richards was the first Dean of the Ontario Agricultural College and he retained the identity and function of the College while enthusiastically embracing and supporting the formation of the University of Guelph. He never forgot the lead role of the O.A.C. in promoting teaching, extension and research that benefited not only the agricultural community, but the expanded community related to all aspects of the environment. He provided leadership in re-organizing the College to include new academic units, new research stations and new buildings based on a long-term management plan in a period of rapid expansion.

Dr. Richards strongly supported the agriculture and food programs of developing countries through the campus Centre for International Programs and the Guelph/Ghana Co-operative project with CIDA. He played a major role in Rural Development Outreach. These initiatives have brought recognition and honour to the College and the University.

“Rick” Richards conducted a study for the re-organization of the Ontario Ministry of Agriculture and Food. He was the first chair of the Canadian Agricultural Research Council (CARC) created by Agriculture Canada and Provincial Ministries to improve co-ordination of research. Fellowship awards have been presented to Rick Richards by the Soil Science Society of America, The Agricultural Institute of Canada and the Royal Society for Encouragement of Arts and Sciences. In addition to his professional contributions, N. R. Richards has served as leader in the Church, in Masonic organizations and in philanthropic endeavours. Dr. Richards has served as elected Grand Master of the Grand Lodge of Free & Accepted Masons of Canada in the Province of Ontario. He was awarded an honourary Doctor of Sciences degree by Laval University in 1967. He has also been named a Fellow of the University of Guelph.

Dr. Richards has impacted Ontario agriculture in many ways during his career as a soil scientist and Dean of the O.A.C.