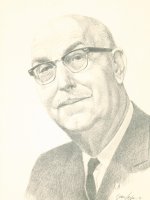 Osborne Sager of Brant County was a teacher by example. As a young man he emerged as a leader in the Brant County Junior Farmers’ organization. After graduating with a degree in agriculture from the Ontario Agricultural College, Guelph, in 1925 he went on to develop his expertise in dairy cattle, particularly the Holstein-Friesian breed. Osborne’s outstanding milk production records chronicle his work from his days at Guelph to 1949 when he obtained the Master Breeders Shield, the highest recognized accomplishment of a Holstein Breeder bestowed by the Holstein Friesian Association of Canada.

A proponent of sharing information for the betterment of all, Osborne Sager was active in many rural organizations. Farmers and rural youth alike of Brant and Wentworth Counties benefited from his work in organizing Farm Forums and as 4-H Leader. His desire to promote excellence in agriculture is best recorded by his involvement with the Ontario Association of Agricultural Societies. Beginning as a judge at local fairs and later becoming President of the Rockton’s World Fair, Sager went on to become a member of the executive of the Ontario Association of Agricultural Societies. During his tenure, Osborne Sager was responsible for the development of many of the components of showmanship we associate with fairs today. A community-minded man, he was a member of the Masonic Lodge, Lions Club and served St. George United Church as Clerk of Session. The recipient of numerous awards, he was presented the “Distinguished Service Award” from the Canadian Association of Exhibitions in 1971.