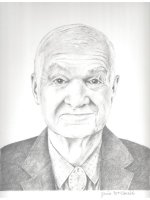 Peter Lindley, partnering at various stages with his father, cousin and son, began his farming career with Lindley’s Fruits and Vegetables on 34 acres in Burlington. Urban growth necessitated a change of location, so in 1974 he established his current business known as PickinPete in Ancaster on 400 acres where he grows strawberries, raspberries, cucumbers, tomatoes and cauliflower. Throughout his farming career he has been adept at integrating new technologies in order to stay competitive and profitable.

He went on to share his expertise, drive and ambition with the entire fruit and vegetable sector and in the process became a major motivator for change. From 1970 he was a part of the Ontario Fruit and Vegetable Growers’ Association (OFVGA) and became its President in 1978. This involvement led to three very crucial changes on behalf of the sector beginning with a review of the constitution of the OFVGA in order to broaden its scope to include all segments of the fruit and vegetable industry, thus giving them one voice when dealing with government on some of the many industry issues. Then in 1979, while Peter was OFVGA president, the organization urged the Federal Government to eliminate the misleading federal requirement that imported produce carry the grade name Canada #1 on packaging. As a result, the Royal Commission of Inquiry into issues in the Ontario food industry, recommended that the use of “Canada” on imports be prohibited and that the country of origin be listed. This would assist consumers to choose local produce over imports. Next, the OFVGA pressed for an inquiry into retail practices such as stocking charges, kickbacks, discounts and allowances which all served to inhibit the sale of Ontario produce. The fact that the organization was able to represent the sector as a united front has served to position the growers well as they move forward and develop a sustainable, competitive industry.

Peter also was appointed to several important committees, including the 1969 Committee on Farm Assessment and Taxation which recommended to the government an appropriate basis for valuing farms for tax purposes; the Ontario Pesticide Advisory Committee 1971-78 which resulted in the classification of hundreds of products specifying appropriate levels of control in their use and application; and the 1983 Task Force on Occupational Health and Safety in Ontario Agriculture which made 52 recommendations to the Ministry. Peter’s contributions to Ontario agriculture did not end there as, while he Chaired the Ontario Agricultural College (OAC) Alumni Association from 1986-89, he signed an agreement with the University to allow OAC Alumni to stipulate that their donations go to OAC thus substantially increasing the OAC Foundation’s ability to support awards and scholarships. He also worked with OAC ’57 to establish an Endowment Fund for undergraduate bursaries, as well as a 50th Anniversary Project to fund a lab in the new Bioproducts Discovery and Development Center at the University of Guelph.

Peter Lindley’s foresight, energy and determination, on behalf of Ontario agriculture and the fruit and vegetable sector, have made him a worthy inductee into the Ontario Agricultural Hall of Fame.