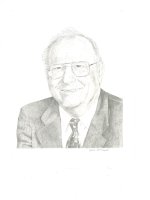 For forty years, Ray Wightman worked tirelessly to promote and support rural telephone services as the owner of the Wightman Telephone Company. His objective was to connect rural residents to their neighbours and to the wider world. As farming became more complex, he knew that farmers needed an increasingly modern and efficient system of communications. In 1965, he was the Founding Director of the Ontario Telephone Association (later the Ontario Telecommunications Association). The OTA is an organization of the independent telephone companies of Ontario and through the OTA Ray and others lobbied the federal and provincial governments, as well as Bell Telephone, for needed improvements to telephone services across rural Ontario. As President of the OTA, Ray worked to make the Independents strong and he mentored them on strategies to prosper through the adoption of modern technological advances including high speed internet service. In 1995, he was awarded an Honourary Life Membership in the OTA.

Ray Wightman also pioneered the burying of rural telephone wires, building a static drag plow to help with this endeavor. This was a major undertaking for the Independents and Wightman Telephone assisted by organizing the burial of new cables for many of the companies. The result was a vastly improved, more reliable rural telephone service. In the early 1970’s, Wightman Telephone buried long distance cable for the towns of Gorrie, Clifford and Walkerton, with precedent setting digital switching and private lines. In fact, Ray’s company was one of the first to eliminate all party lines and get all of its lines underground for uninterrupted service. Wightman Telephone moved to digital switching in 1990, and fibre optic cable has since replaced copper cable on the main lines. Now as an internet access provider it links subscribers to data-bases and chat groups around the world.

He was also very interested in the preservation of local and rural history. He is a long time member of the Maitland Valley Region Historical Automobile Society and was a Director of the Wellington County Museum and Archives. In 1977, Ray donated equipment and services of Wightman Telephone to the Ontario Agricultural Museum for the installation of switchboards and the burying of underground cable. In 1997, he donated all the telephone equipment for a major show of Telecommunications History at the Wellington County Museum and Archives.

Through his continual upgrading of the Wightman Telephone system, Ray Wightman has helped to reduce rural isolation and he has given the agricultural community an important tool for operating in a global economy. His sons Blair and Paul are now carrying on the business and continue their father’s emphasis on the importance of leading edge communications technology.

Ray Wightman is indeed a worthy addition to the Ontario Agricultural Hall of Fame.