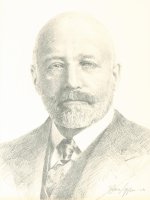 “Bob” Holtby, of Port Perry, Ontario, became a member of the Holstein-Friesian Association of Canada in 1910 and in 1924, after he had served eight years as a Director and was in line for the Presidency, was persuaded to become a fieldman for the Association. A pioneer in the field of breed extension, his methods and techniques have been copied but never excelled.

After organizing the first “Black and White” show in Canada in 1938, he used his influence and enthusiasm to promote the development of similar shows elsewhere. There are now 75 such shows across the country.

Bob Holtby managed the National Holstein Sale for 15 years during which time he traveled from coast to coast in his efforts to select only the best animals available. The show exerted great influence by providing a suitable market for high quality animals and in estimating and maintaining standards of value for purebred stock. He served as Selective Registration inspector for eight years and was responsible for most of the Holstein classification throughout Canada. Classification has contributed as much or more than any other single program to establish the present high standard of quality in the breed.

Bob Holtby, a respected Canada-wide judge of Holsteins, was previously named to the Canadian Agricultural Hall of Fame.