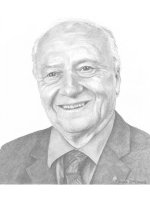 Robert Lang was the founding Executive Director of the International Livestock Management Schools (ILMS) from 1986-2001. The ILMS vision was to teach international agriculturalists about techniques and programs developed in Ontario to improve livestock agriculture in their homelands. Over the years, the relationships developed have also enabled many Ontario agribusinesses to expand their sales of products and services into numerous markets overseas. Bob was also a Dairy Cattle Specialist with OMAFRA and was part of a team which developed the first computer-based dairy cattle feed formulation system by analysing feedstuffs and maximizing the cost effective use of on-farm feed. This resulted in improved animal health as well as feed cost savings for producers.

As President of the Ontario Association of Animal Breeders from 1981-86, he facilitated the sharing of genetically proven sires across Ontario through three AI cooperatives to accelerate genetic progress in beef and dairy animals. While at OAAB, he also helped establish two Research Chairs at the University of Guelph in Dairy Cattle Breeding and Embryo Production, and at the same time he was working to create the Centre for Genetic Improvement of Livestock.

From 1979-86, as Associate Manager at Eastern Breeders Inc., he led the expansion of the Young Sires Proving Program which made Ontario and Canada a world leader in dairy cattle genetics.

Bob Lang has provided leadership to educate young producers through a regional program to focus on breed improvement tools to increase on-farm profitability. He has also spoken to hundreds of groups around the globe on improved livestock performance and management. These efforts have resulted in sustainable dairy and beef production in parts of the developing world as well as the establishment of global appreciation for Ontario dairy and beef genetics. In 1992, he received the Rotary’s Paul Harris Fellowship for Effecting International Understanding, Friendship and Goodwill.

Certainly, Robert Lang’s extensive vision and impressive accomplishments make him a worthy Inductee into the Ontario Agricultural Hall of Fame.