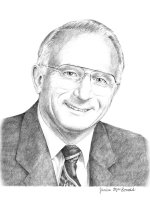 Robert Hutton was a leader in Ontario’s fertilizer industry at a time when it needed to position itself to compete on the global stage.

He began his career in agriculture in 1964 by returning to the family business, Hutton Farm Supplies, and developing it progressively with such initiatives as building a bulk fertilizer blending plant; selling anhydrous ammonia to farmers; and buying a computer system in the 1970’s connected to the Chicago Board of Trade to facilitate the hedging of grain and soybean meal futures contracts. When Hutton Farm Supplies franchised with CIL (Canadian Industries Ltd.), Bob took on the role of Assistant Manager of the CIL Agromart Service Centers. His primary responsibility was to transform underperforming farm supply locations into profitable businesses. By 1990, he had established 18 Joint Venture Agreements with retail locations throughout Ontario, which offered them a volume purchasing program, with savings then passed on to Ontario farmers.

In 1993, Terra Industries took over, and Bob continued as Operations and Development Manager, expanding the Agromart Group to new locations in the Maritimes. He recognized the need to build a fertilizer terminal to serve the group, and did so in Belton, Ontario in 1996, where there was also an additional blend plant and storage for anhydrous ammonia. He then began work on a rail terminal at the Belton site to bring in potash from the west and fertilizer from ports on the Great Lakes. When completed in 1997, it was a state-of-the-art facility and allowed the Agromart managers more flexibility to source, store and supply fertilizer.

In 1999, Terra sold its Canadian holdings to the Agronomy Co. of Canada and Bob continued his senior role, working next on building a processing, packaging and shipping company that allowed Ontario farmers access to specialized premium food grade international soybean markets. Bob worked with Japanese companies to form a partnership to market Ontario soybeans globally. In recognition of this accomplishment, the Agronomy Co. of Canada designated their first variety of identity-preserved soybeans to be named IRWIN in Bob’s honour. When Robert Hutton retired in 2001, the Agromart group of companies was the largest crop input supplier in all of Eastern Canada.

In addition to these successes, Bob Hutton joined The Fertilizer Institute of Ontario (TFIO) in 1987, serving as President from 1995-96. During this time, TFIO addressed the issue of U.S. fertilizer entering Canada without proper registration. Guidelines were established for construction and product storage for new agri-chemical warehouses; major improvements were made in the consistency of the soil analysis system in Ontario; and recycling for pesticide containers was developed. Bob also spent a decade on TFIO Credit Committee which completed the Cost of Doing Business Analysis to allow banks a better understanding of the credit needs of farmers and to put in place loan facilities that had previously not been available to Ontario producers.

Ontario agriculture and the fertilizer sector have been left a substantial legacy by Robert Irwin Hutton, ranging from infrastructure development, to international marketing opportunities, and to a very successful agribusiness model.

The Ontario Agricultural Hall of Fame is proud to recognize Mr. Hutton’s accomplishments on behalf of Ontario agriculture.