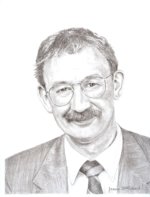 Nominated by: Ontario Federation of Agriculture and Terry Daynard

Roger George became a Director of the Ontario Federation of Agriculture (OFA) in 1982 and ultimately its President from 1990-95. During this tenure, he worked hard to strengthen general farm organizations.  He realized that as the number of farmers declined, even while their contribution to Canada’s GDP increased, it was critical to ensure there were structures through which farmers can speak with a united voice.

One of Roger’s most significant achievements was his work with other farm leaders and then Minister of Agriculture (Elmer Buchanan) to pass stable funding legislation for the major farm organizations. Roger’s ability to build consensus enabled the government to pass the Farm Registration and Farm Organizations Funding Act in 1993. This greatly increased the membership base of the general farm organizations and enabled them to devote their increased resources to research, lobbying and developing new agricultural and agri-food policies

During these years, Roger participated in the Steering Committee to create the Ontario Farm Environmental Coalition designed to enable farmers to set the agenda to mitigate several environmental issues associated with agricultural production practices. OFEC proposed the development of the Environmental Farm Plan which was established with the collaboration of OFEC, the Ontario Soil and Crop Improvement Association, Minister Buchanan and Dr. Gord Surgeoner. Ultimately, over 35,000 Ontario farmers completed an Environmental Farm Plan and similar programs were inspired in other parts of Canada.

Roger was also the founding Chair of the Agricultural Adaptation Council in 1996. He was instrumental in convincing the federal and provincial governments to create the AAC and provide funding for the projects deemed important by farm and agri-food associations. Members of the AAC were responsible for approving projects and overseeing their implementation. It became known for its objectivity, competence and timeliness, and 25 years later, it continues to function.

Roger also supported the development of the Ontario Agricultural Training Institute.  He was instrumental in securing government support for OATI, believing it was important for farmers to demonstrate leadership in agricultural education. Roger George is a visionary thinker and utilized his organizational and communication skills to convince others within the agriculture and food industry to provide leadership on issues of unity, funding, revenue insurance, the environment, training and education.