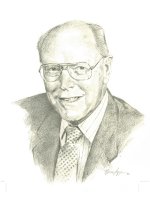 Nominated by: The Land Improvement Contractors of Ontario

Ross Weston Irwin is recognized for his outstanding contribution to the field of water management. Following graduation in 1951 from the Ontario Agricultural College he embarked on a 36-year career in teaching, research and extension at the School of Engineering, Ontario Agriculture College, University of Guelph. He taught courses in hydraulic engineering, irrigation and drainage, soil and water conservation engineering, agricultural soil mechanics and snow and water hydrology to name a few.

His research interests included land drainage technology, pump drainage, farm water supply, hydrology of organic soils and soil analysis for drainage. As an extension coordinator he organized technical conferences and wrote publications on a wide scope of subjects. Through research and extension to farmers, contractors and practicing drainage engineers, Ross advanced the art and science of soil water management and drainage throughout Ontario and the humid regions of the United States. He wrote the first edition of the Drainage Guide for Ontario in 1957. This document has become the standard used by farmers, tile contractors and drainage engineers. Since then the Guide has been revised 10 times and is currently undergoing an 11th revision.

Ross is particularly adept at moving innovations from the laboratory and research plots to the hands of those who design and install farm and road drainage systems. When plastic drain tubing was a new product he developed the “thumb test” to determine if the tile was strong enough to withstand the stress of installation and soil settlement. He created the “coffee can test” to illustrate whether or not a soil needed a filter around the tile or tubing. Without his leadership the adoption of plastic drain tubing and the drainage plow for installing tubing would have been much slower. He personally funded the first meetings of tile drainage contractors in Ontario. From this initiative the Ontario Farm Drainage Association was formed in 1958. This Association provided a forum for contractors to exchange ideas, solve problems and set quality standards for tile installation.

He bridged the information gap when new installation techniques such as the drainage plow and new materials such as High Density Polyethylene Tubing became available. Under Ross’s leadership contractors have tile drained much of the productive land in Southern Ontario. Ross chaired the committee assigned the task of consolidating Ontario’s drainage legislation in 1962. He also acted as a consultant to the Provincial Government after the Select Committee on Land Drainage Report was filed in 1974 and to a great extent guided the drafting of the Drainage Act 1975. Following Hurricane Hazel in 1954 Ross studied the effect of storms on farm ponds and developed a methodology for designing farm ponds. This methodology was adopted by the Government of Ontario and is still used. At this time he was also monitoring the organic soils of the Holland Marsh and went on to develop a water management plan that reduced the rate of oxidation of these soils and prolonged the agricultural productive life of the marsh. His recommendations have been adopted for use in organic soils throughout the humid areas of North America.

Ross was a prolific writer and he contributed over 135 reports and papers to referred journals and professional publications. As a result, it seemed natural that Ross’s interest in rural life should lead him to publish books on agricultural machinery, the history of drainage in Elma Township and the history of Mariposa Township. Ross Irwin’s outstanding contributions to the advancement of agriculture have been recognized by many professional societies. These societies include the Canadian Society of Civil Engineering, the Land Improvement Contractors of Ontario, the Ontario Good Roads Association, the American Society of Agricultural Engineers, and the Canadian Water Resources Association. In addition, he has received several awards including the Centennial Medal from Canada.