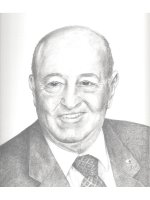 Russell Dow was the owner of Dow Downs Farm in Bowmanville along with his wife Marilynn, where they raised purebred Oxford and Leicester sheep flocks. He also operated Dow Downs Sales to market breeding stock across Canada. This resulted in the establishment of the first national sale for the sheep industry, now known as the All Canada Classic. In addition, with his partner Peter Levine, he managed Le Do Sheep Company as a source of breeding stock for Ontario producers as well as brokering thousands of sheep and lambs across Canada and globally.

These enterprises gave Russ extensive knowledge of the sheep industry, enabling him to link producers with market opportunities, develop improved genetics, arrange livestock transportation services and place an emphasis on animal quality, market timing, carcass uniformity and industry planning. He was known as an innovative and progressive leader in the establishment of the Rideau/Arcott breed which has become a major component of Ontario’s sheep industry because of its essential characteristics of fast growth, good milk production, multiple lambs and decreased seasonality. Russ was a constant promoter of purebred genetics, and performance testing. Combining this with his marketing ability, he enhanced commercial production opportunities for Ontario producers as well as working on the key issues of promotion, financing and industry advocacy.

Russell Dow operated the sheep sales for the annual Sheep Focus events in Ontario for merchandising breeding stock, and he organized Breeding Clubs to assist breeders to market their stock both in Canada and abroad. Also, he was instrumental in developing the Ontario Lamb Improvement Breeding Strategy to educate producers on genetic selection and focused cross-breeding strategies.

We heartily welcome Russell Hume Dow into the Ontario Agricultural Hall of Fame.