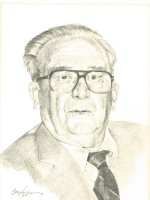 Sam Rathwell was born and raised at Navan in Cumberland Township, Russell County. He firmly believed in the importance of agricultural fairs and community organizations in that they provided opportunities for production improvement, education and information exchange.

Sam’s commitment and hard work went far in establishing the Navan Fair. He became its first President in 1945-46 and helped shape the organization which today is still recognized for its excellence in competition. He also served on committees of the Royal Agricultural Winter Fair, the Central Canada Exhibition and the Metcalfe Fair. As a Councillor on the Cumberland Township Council from 1952-58, Sam Rathwell demonstrated his belief in the strength of Ontario’s rural communities, sharing his simple philosophy that a “knowledgeable community is a thriving and growing community.”

Rathwell’s largest contribution to the development of agriculture was in his work with Holstein-Friesian cattle. Long recognized as one of the best judges of the breed, Sam became the Secretary, then President of the Carleton Russell Holstein Club. He developed and bred Rockdale President, an early foundation sire, and went on to receive many All-Canadian nominations for Holstein Cattle. In 1958 he was awarded the Master Breeders’ Shield. From 1952 to 1959 he was a Director of the Eastern Ontario Breeders’ Association, which later became Eastern Breeders Incorporated, and served on the Holstein Sire Selection Committee from 1963 to 1975.

The Rathwells were active community members. Sam and his wife worked tirelessly to improve their local facilities and organizations, always willing to share their wealth of knowledge and offer encouragement and support to younger generations.