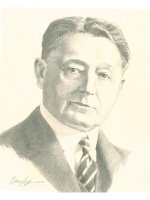 Sir Adam Beck, born in Baden, Ontario in 1857, was a man of immense energy, persuasive skills and long perseverance. He made important contributions in the fields of rural electric power, rural health, and in the breeding of horses.

As the first and a long time chairman of the On1ario Hydro Commission, he pioneered the dream of bringing electric power to the farmsteads of rural Ontario. Although ridiculed as a visionary, he persisted in his idea of public ownership of hydro and of a grid of electric power lines covering rural Ontario until it became accepted. With his famous “Electric Circus" he personally demonstrated what might be achieved.

He was Mayor of London 1902- 04 and served as a member of the Ontario Legislature 1902 -1919. He was a noted horseman with a stable of international reputation. In World War I, he was in charge of the horse procurement commission that bought 26,000 horses for the Canadian Army.