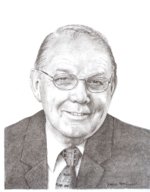 Nominated by: Beef Farmers of Ontario

Stan Eby is a visionary beef producer who began farming in 1971 near Kincardine. In 1974, he built one of the first slatted floor beef barns in Ontario. His foresight was shown when he became one of the few beef producers who supported the introduction of a National Cattle Identification Program. He realized that such a requirement would be an excellent vehicle to deal with foreign animal diseases and would provide an information-conduit to beef producers. Ultimately, when the Canadian Cattle Identification Agency made ear tags mandatory in 2002, the timing of this initiative proved to be very important.

In 2000, Stan Eby became the President of the Ontario Cattlemen’s Association (OCA).  Shortly thereafter, the Walkerton water system became contaminated with E-coli. For some time, the cattle industry was blamed for the contamination. Stan and senior staff set up an ad hoc crisis management team.  As a local farmer and industry leader, Stan conducted hundreds of meetings and interviews about the environmental stewardship of the beef industry and the lack of proper water treatment for the water system in Walkerton. Ultimately, charges were laid against the utilities manager and water foreman. There was an overhaul of Ontario’s drinking water legislation and, with the leadership of President Eby, the OCA created a blueprint for all of agriculture to deal with environmental issues.

Then in March 2002, Stan was elected Vice President of the Canadian Cattlemen’s Association (CCA) representing 60,000 Canadian beef farms and feedlots. He advocated for federal support of the CCA’s aggressive pasture-to-plate beef safety and quality program, for a science-based approach to soil management, and for the Beef Industry Development Fund to advance competitiveness, food safety and marketability. His advocacy in these areas also proved to be prophetic.

Canada’s first case of BSE was found in May 2003. This turned into the worst health-related crisis faced by any commodity group in the country and the US announced a ban on all imports of Canadian beef. Stan, now CCA President (2004-06) swung into action.  Under his leadership, the CCA developed a strategic plan to reposition the Canadian beef cattle industry including the expansion of current processing facilities, set-aside programs for market-ready cattle and much work on re-opening the borders to trade. He made many trips to the USA to work with the National Cattlemen’s Beef Association, the American Meat Institute and the National Meat Association. A long-term debt program and temporary tax deferrals were also put in place to restore viability and stability in the Canadian beef industry. Stan Eby demonstrated over and over again his ability to maintain a steady hand, to foresee and overcome barriers to solutions, and to inspire and lead a national organization. The CCA started an aggressive global marketing strategy and many of the strategies and initiatives developed under Stan’s leadership as CCA President will serve as a template for leaders facing other industry challenges.