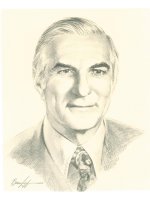 T. R. “Dick” Hilliard devoted his life to the development of young farm leaders. Born on a farm near Carleton Place, Ontario he graduated from the Ontario Agricultural College, Guelph in 1940. He joined the Ontario Department of Agriculture and remained with the Government of Ontario until his retirement, except for wartime service with the Royal Canadian Navy, 1942 - 1945.

Beginning as an Assistant Agricultural Representative in York County, he was soon appointed Junior Extension Fieldman in charge of Junior Farmer and 4-H programs. He was secretary of the Junior Farmers’ Association of Ontario from 1949 to 1955, and in those years organized the first provincial leadership camp and bus tour programs.

He rose quickly through the public service, and was in turn, Deputy Minister of Energy Mines and Resources, Government Services, and Agriculture and Food.

He was a charter member and president of the Ontario Institute of Professional Agrologists and served in a number of capacities at the University of Guelph. After retirement, he volunteered to work with the Junior Farmers to set up their Foundation.

Through his efforts, Dick Hilliard left a legacy of hundreds of young farm leaders for Ontario Agriculture.