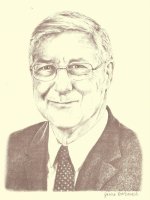 Terry Daynard’s background in the corn industry is wide-ranging, as a corn producer, a corn researcher and educator at the University of Guelph, as Executive Vice-President of the Ontario Corn Producers’ Association (OCPA), as contributing editor of Ontario Corn Producer magazine and as President of the Ontario BioAuto Council. During the sixteen years he taught at the U of G, he influenced many students to make their careers in the grain industry and several of his PhD students have gone on to serve the grain and corn sector as researchers and educators. As a researcher, he has made important contributions to the corn industry in areas of corn physiology and hybrid development, grain development and photosynthesis, drought and stress resistance and primary tillage for maize production in Ontario. He built the OCPA into one of the most dynamic farm organizations in the province, while working to establish the Grain Financial Protection Fund. Through the Ontario Corn Producer magazine, he was instrumental in informing producers about such diverse topics as research innovation, bio-products, environmental practices and grain trade issues.One of Mr. Daynard’s key skills is his ability to create coalitions and partnerships to influence policy, innovation, growth and development in Ontario agriculture.

Terry served as President of the Canadian Renewable Fuels Association which led to the establishment of the fuel ethanol industry in Ontario. There are currently six ethanol plants in Ontario, producing 800 million liters of ethanol annually, using 80 million bushels of corn per year. He and others formed the first AGCare Board (Agricultural Groups concerned about Resources and the Environment) to deal with environmental issues affiliated with agriculture. One important development was the Grower Pesticide Safety Course, now mandatory for any farmer purchasing or using agricultural pesticides.

Terry helped to establish and later served as Chair of Ontario Agri-Food Technologies, an association created to focus on the development of agriculture and food programs in Ontario, to ensure continuing innovation, business opportunities and new partnerships, and to develop new markets for grain beyond food and feed.

He served as Chair of Ontario Agricultural Food Education which was formed to develop agricultural education resource materials so that Ontario school children have the opportunity to learn more about the province’s food chain. He was a chief author of “Our Farm Environment Agenda” which outlined the environmental principles and practices of Ontario producers and led to the development of the first Environmental Farm Plan initiative in Canada. Terry was successful in bringing the chemical, plastic, and agriculture and forest industries together to form the Ontario BioAuto Council in 2007 in order to create and commercialize bio- based automobile technologies. He was also instrumental in creating the Agricultural Odyssey Group to develop strategic solutions, along with Ontario’s farm leaders, to economic and other issues confronting the agrifood sector.

Those who work with Mr. Terry Daynard consistently describe him as a visionary, as extraordinarily productive, as an innovator, as a supporter of a sustainable agricultural environment and as a gifted communicator. Certainly, his numerous contributions to agriculture in Ontario and beyond have earned him a well deserved place in the Ontario Agricultural Hall of Fame.