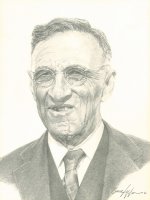 A fruit grower in Peel County, Colonel Kennedy first entered the political arena as a 21-year old school trustee of the Toronto Township School Board. He later became Councilman and Township Reeve. In 1919 he was first elected as a member of the Ontario Legislature, a position he was to hold for over 35 years. He served five terms as Minister of Agriculture for Ontario for a total of twelve years and was briefly Premier of the Province during 1948 – 1949.

Deeply concerned about the future of Ontario farmers, he sponsored the Ontario Marketing Act of 1931 and the nationwide sequel of 1934, the Milk Control Act, the Ontario Stock Yards and the Ontario Food Terminal. He actively encouraged artificial insemination as an effective means of livestock improvement and also was instrumental in creating a special soils department at the Ontario Agricultural College.

Seeing the potential of electricity to improve farm conditions, he brought rural hydro to Peel County as early as 1922.

Known by most as the “Colonel,” Tom Kennedy had an active military career, commanding the First Canadian Cavalry Brigade in France in 1915.