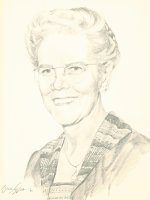 Nominated by: Philip W. Burke and Seven Beekeeper, Friends of the Family

Vera Maguire was the personal embodiment of the rural traditions of open door and open heart. After her marriage to Wilbert Maguire, a beekeeper, she embraced apiculture and made her mark on the industry through writing her “Hello Folks” column in the Beekeepers Journal, and later editing a recipe book featuring the use of honey. Her one woman promotional show of cooking demonstrations using honey took her across the province speaking to Institutes, at fairs and the Plowing Match, and even performing on T.V.

Mrs. Maguire’s work with the Barrie Fair, pioneering the Food Committee and guiding its development for almost twenty years, won her an Agricultural Service Diploma awarded by the Ministry of Agriculture and Food. The other work in the agricultural community for which she was honoured to be the only female Director and Convenor of the Women’s Building at the 1967 International Plowing Match.

For 30 years, Mrs. Maguire was active in the local Women’s Institute in which she rose from Secretary of the Minesing Branch to area president. Also a leader in the U.C.W., Minesing United Church boasted her membership and support for more than half a century.

Recognized as an outstanding community leader, Vera Maguire was named Minesing Citizen of the Year in 1976 and inducted into the Simcoe County Agricultural Hall of Fame in 1989.