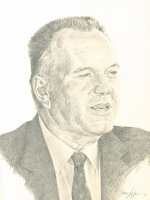 Through his honesty, vision, skill and enthusiasm Walter Renwick, more than anyone else, has had a tremendous impact on Canada’s sheep industry. His ability to lead by example, whether in the boardroom or on his farm in Huron County, earned him the credibility and respect he deserved.

In 1978, Walter imported 720 registered Polled Dorsets from New Zealand and maintained a flock of approximately 700 ewes from that date. The positive management and genetic effects of the importation are still very much in evidence in the Canadian sheep scene today. He was also a maple syrup producer for 20 years and served as provincial director for several terms to the Ontario Maple Syrup Producers’ Association. He was one of the originators of the Belmore Maple Syrup Festival.

It has been said that Walter Renwick made things happen in the sheep industry. He directed his considerable energy and enthusiasm through several organizations as founding member and first president of the Western Ontario Lamb Producers’ Association, Director and Chairman of the Ontario Sheep Association and Vice-Chairman of the Ontario Sheep Commission, the report of which led directly to the formation of the sheep Marketing Agency. He also served as Director and Vice-Chairman of the Ontario Sheep Marketing Agency and Director and Chairman of Canada Sheep Council. Renwick was the lead negotiator for the industry with interprovincial and federal negotiators to arrive at the National Tripartite Stabilization program for sheep, and this safety net program has been of great assistance to Canada’s sheep producers.

Walter Renwick played a leading role in negotiating an agreement on the regulation of importation of New Zealand lamb into Canada. This agreement has been of substantial economic value to sheep producers across Canada.

Active in his home community, Walter served as a member of the Howick Central School Board, Howick Township Council and Chair of the building committee for the new Belmore Community Centre. He served one term as President of the Bellmore Chamber of Commerce and was Chairman of the building committee and of the Board of Belhaven Seniors retirement facility. Walter Renwick was an active lifelong member and Steward of MacIntosh United Church.