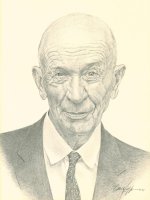 Walter Louis Warder was a pioneer in land conservation and the efficient use of poor soils. His ranch, north of Dyer’s Bay in St. Edmunds Township, Bruce County, became a showplace of what could be done with low grade, untillable soils by scarification, fertilization and the use of the correct forage seeds. He was one of the first farmers to recognize the value of birdsfoot trefoil and use it as a pasture plant.

Mr. Warder developed the ability to diagnose and treat health problems in sheep, cattle and horses. Although his main interest was in his cow/calf operation, he recognized the economic advantage of grazing stockers on renovated rough pastures for beef production.

An agricultural and community leader, he acted on the Advisory Committee to the Select Committee on Conservation for Ontario, served four terms as local Reeve, was President of the Bruce Peninsula Federation of Agriculture for 10 years and served as President of his local agricultural society. In 1977, Walter Warder wrote and published “Between You and Me and the Gatepost”, a history of the development of the Lion’s Head area and the evolution of agriculture in his time.