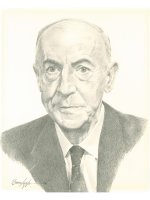 In 1936 he was a prime mover in the development of the Ontario Conservation Association. The Upper Thames Valley Conservation Authority was created largely because of his drive and dedication. In 1952 he was a leader in the formation of the Conservation Council of Ontario. Through the pages of the Farmer’s Advocate, and from the public platform, Watson Porter preached the gospel of conservation until the theory became practice. He chaired the first National Radio Forum Broadcasts on the Canadian Broadcasting Corporation.

He was elected a Fellow of the Agricultural Institute of Canada in 1952 and was given an award of merit by the Horticultural Association of Ontario. In 1955 Watson Porter received an honourary Doctor of Law Degree from the University of Western Ontario.